The say change begins at the end of your comfort zone and really that’s where growth begins.

At ATA, we are reinventing ourselves and growing our digital presence during this period of change.

A scant few months ago Postmedia announced that nine urban dailies across the country would stop printing Monday editions beginning October 17. The cuts to the nine– ranging from the The Vancouver Sun to The Montreal Gazette–reflect a number of rude realities experienced by the Canadian publishing industry for decades now.

In a statement, Postmedia spokesperson Phyllise Gelfand said that the cuts “reflect the rapidly changing news consumption habits of our readers, the needs of our advertisers and the escalating costs of printing and delivering a printed product.”

The move means that The Toronto Star, Toronto Sun, Winnipeg Sun, Journal de Montreal and Journal de Quebec will be the last remaining dailies to publish seven days a week. Not even The Globe and Mail publishes that frequently.

Heritage Canada states that over 450 news outlets have shut down since 2008, including 60 during the last two years alone. Part of the reason for this sea change is the fact that the majority of ad revenues have moved away from print and on to digital platforms and social media. Shockingly perhaps, but not surprisingly, is the fact that in 2020, 80 per cent of all online advertising was gobbled up by only two tech giants: Facebook and Google.

As of this writing Bill C-18 is being developed and if passed, would require tech corporations to dish out fair compensation to media outlets for news that is shared on their platforms. Furthermore, journalistic independence, investment in a range of news outlets and fair pay are just some of the criteria currently being reviewed.

So what does all this information have to do with your favourite automotive magazine you ask?

Your friends at Auto and Trucking Atlantic are not immune to what’s been going on across Canada for many years now. We’ve had to look at the facts and weigh these against some harsh realities while considering options.

And no, rumours of our death have been greatly exaggerated.

Happily, a plan is in place and we think you’ll like where we’re going. Beginning early next year, ATA will be morphing into a largely digital presence. We’ll continue to publish bi-monthly but we’ll also be supplementing our content with 12 newsletters per year, while two magazine format issues, Spring and Fall, will remain paper-based.

We’ll continue bimonthly but issues will be digital and slightly reduced in size. Content will be leaner, meaner and closer to home. All your favourite content will remain although slightly altered in form. And we’ll retain our down home flavour while delivering the quality stories you’ve come to expect.

At this point, I’m reminded of a model that was introduced in university and called The Stages of Change. It’s composed of five parts. The first part, precontemplation, occurs when there’s no change in the foreseeable future. Next is Contemplation where people know that change is necessary but remain ambivalent about it. Preparation is when people enter the data collection and planning stage. Action is the point where people change their behaviour, environment or experience in attempt resolve their problem. Finally, Maintenance is the step where people work to prevent relapse while uniting the gains made during this change.

Truthfully, we were living in the Contemplation stages for quite a long wilderness period. But now the time is right, no, necessary, to move into the Action stage of things. We believe it’s a step in the right direction and one that reflects the times we’re living in. Hopefully you will too and you’ll climb aboard this new and strange beast that moves us forward.

With that we thank you for all your support and feedback and look forward to the magical places we hope these changes lead us to. Cheers to new beginnings!

0 shares
Previous: Crime in Trucking
Next: The Atlantic Road Report

11 More posts in November 2022 category
Recommended for you 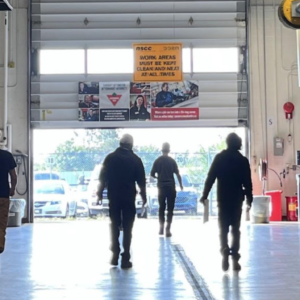 New Tire and Maintenance Technician Program is a Pathway to Success

The Automotive Sector Council of Nova Scotia has opened the door to employment for six...