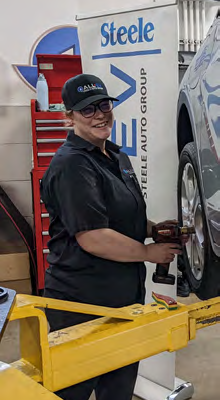 Haley Geldart of Coldstream, N.S., was just a toddler when she started tinkering with tools alongside her two brothers under the supervision of their father, Eldon Geldart, inside the family’s hobby garage.

Now 23 years old, Geldart’s passion for taking things apart and putting them back together again has translated into a successful apprenticeship at the All EV Canada location on Kempt Road in Halifax, where she’s been working as an apprentice and learning the ins and outs of electric vehicles for the past few months.

“Me and my siblings were in the garage as soon as we were able to walk,” Geldart recalled of what inspired her to enrol in the Automotive Service and Repair program at Nova Scotia Community College, where she graduated from in June 2021.

“There’s pictures of us wearing diapers, sitting on the hoods of cars. If there was anything (our father) had just lying around, sitting around, he’d give us ratchets and wrenches and let us go to town taking it apart and doing what he wanted.”

Before getting into the automotive business, and after graduating from Cobequid Educational Centre in Truro, Geldart spent about a year working as a pre-board screening officer with Transportation Security Administration at Halifax Stanfield International Airport. But the global pandemic quickly changed her career plans as the airport substantially cut back on its staff in order to mitigate the COVID-19 impacts.

“When I was younger, I had spent a lot of my time in my father’s hobby garage with him, and as I got older, I didn’t do it as much, until I got a couple of my own cars, and then I realized how much that I missed doing that stuff,” Geldart said of what inspired her to take mechanical matters into her own hands.

“And I didn’t want to have to rely on my father to be able to repair my cars anymore,” she added. “I wanted to be able to do it myself… and I’ve always had an interest in vehicles, so it was a match for me.”

So Geldart recalibrated her career plans and decided to pursue her true passion by first joining the NSCC program and then the workforce, landing her first job in the automotive business at Bench Automotive on Waverley Road in Dartmouth, where she spent a year learning how to service high-end vehicles.

Ultimately she ended up following her mentor, service manager Bill Hart, from Bench Automotive to All EV, where she’s enjoying learning about the intricacies of electric vehicles and how they differ from typical gas-fuelled vehicles.

“I just helped and did a battery swap in a Tesla this week and it was really cool to be able to do that,” Geldart said.

“It’s very interesting,” she added. “I didn’t think that there would be that much more to it, but it’s cool to see the difference.”

For instance, she said, “the fact that with electric, there’s no hesitation to the power you have; once you put your foot on the pedal, you’re gone.”

“It’s very mind-opening,” she added. “It’s a lot to take in but it’s an adventure that will open up my career even further.”

Geldart met mentor Hart through her common-law partner, Cody McLennan, a metal fabricator, who has always had her back as she has followed her dreams. She also credits her mother, Michelle Geldart, for encouraging her throughout high school to consider going into a trade and supporting her throughout her schooling. She’s grateful to have so many people cheering her on as she pursues what she loves most.

“I like working with my hands. I like being able to take things apart,” Geldart said. “You know the basics of how it works, but when you take it apart and you have it in your own hands, you’re able to really understand and see how it works.”

So what’s next for young All EV apprentice Geldart?

Her next goal is to “pursue and get my red seal,” she said, adding she and boyfriend McLennan would love to buy their own property and perhaps start up their own little side shop for fun projects.

“My boyfriend and I have a Miata, and I’ve had a couple of other cars, and just being able to fix it and do different stuff and make it your own personal project; it’s pretty cool to see what you can do with different vehicles.”

As for being one of few women in a highly male-dominated industry – Geldart was the only female in the shop at Bench Automotive and the same is currently true at the All EV location in Halifax – the strong young apprentice isn’t discouraged herself and hopes to encourage other girls and women to consider getting into the business.

“I’d say that it’s something you really want to try, you can do it,” Geldart said. “If you really put your mind to it, it’s a very rewarding career.”

0 shares
Previous: All about customer satisfaction
Next: Women With Drive 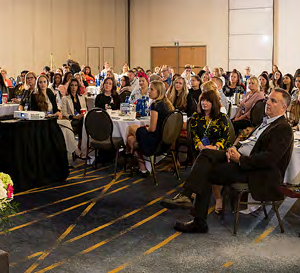 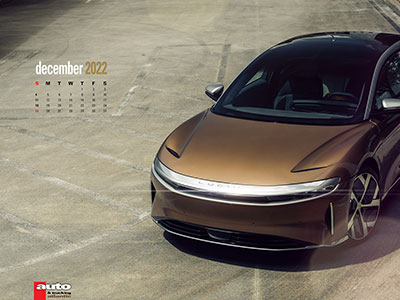